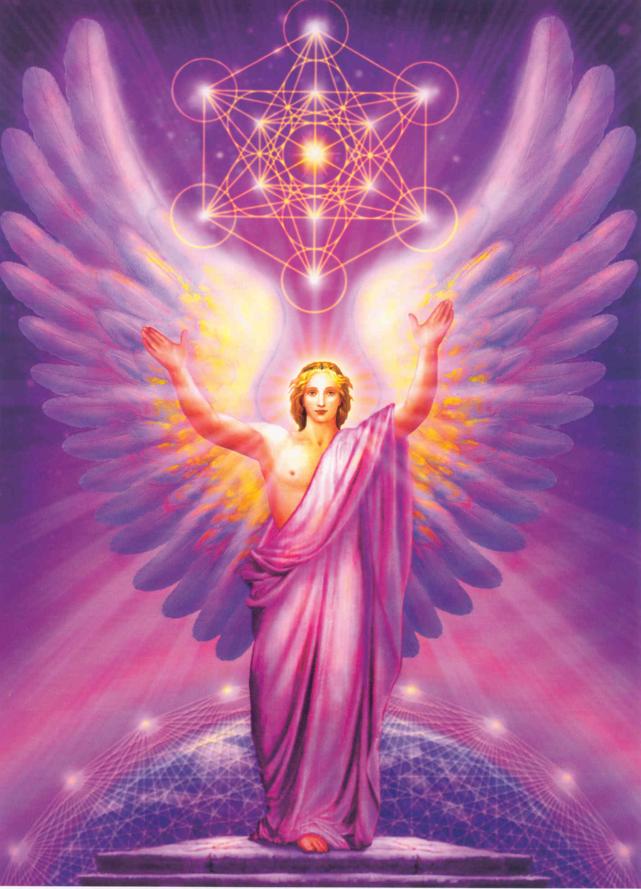 Click on the image to see another pictures of Archangel Metatron

Archangel Metatron
(Judaic, Cabalistic)
Also known as Metatetron, Merraton, Metaraon, Mittron.
The meaning of Metatron's name isn't clear, since his name doesn't end in the "el" suffix of all the other archangels (with the exception of Metatron's twin brother, Sandalphon). "El" stands for "El Elyah," the Hebrew name of the all-loving God of Abraham—as opposed to the jealous, vengeful God of Moses, who is called Jehovah. So, archangel names describe their function, and then end in "el" to mean "of God." The term angel itself means "messenger of God."


Metatron's unusual name probably stems from his uncommon origins, as one of only two archangels who were once mortal men who walked upon the earth (the other one being Sandalphon, who was the prophet Elijah). There is various speculation among texts and experts that the name Metatron means "he who occupies the throne next to the Divine throne," or that his name is a derivation of the name Yahweh, the Jewish term for the unspoken sacred name of God. He has also been called "the Angel of the Presence."

Metatron is the youngest of the archangels, since his creation occurred after the other archangels. The prophet and scribe Enoch, who is said to have "walked with God" (in the book of Genesis), retained his God-given purity during his mortal life. Enoch was also a scholar on heavenly secrets, having received The Book of the Angel Raziel (also known as Sefer Raziel), a textbook about God's workings penned by Archangel Raziel, and given to Adam, Noah, Enoch, and Solomon. As a result, God escorted Enoch directly to the seventh Heaven—the highest level—to reside and work. Enoch was given wings and transformed into a great archangel named Metatron.

Since Enoch was a skilled and honest scribe upon Earth, he was given a similar job in Heaven: to record everything that happened on i Earth and keep it in the Akashic records (also known as The Book of Life). Enoch is in charge of recording and organizing this material.

Metatron is a fiery, energetic angel who works tirelessly to help Earth's inhabitants. He acts as an intermediary between Heaven and Earth, since he's had extensive experience as both a human and an angel. As such, he helps us understand Heaven's perspective, and to learn how to work with the angelic realm.

Metatron also has a special place in his heart for children, especially those who are spiritually gifted. After the Exodus, Metatron led the children of Israel through the wilderness and into safety. He continues to lead children today, both on Earth and in Heaven. Metatron is very concerned about children who are labeled as having Attention Deficit Disorder (ADD) or Attention Deficit Hyperactivity Disorder (ADHD), and he helps parents, educators, scientists, and health-care professionals find natural alternatives to Ritalin and other psychoactive medications.

Metatron's energy is strong and highly focused, like a laser beam. He's very motivational, and will encourage you to overcome procrastination and to take bold steps forward. He's also philosophical and can help you understand things like other people's motivations for action, and why different situations occur.

He says: "My human life gave me the ability to grasp human concepts of life and death, which are abstract concepts to those who've always existed in the ethers. I do understand the gripping fear of death that underlies many human emotions. Having crossed that divide, though, I want to underscore At sentiment that you've so often heard: that there truly is nothing to fear in coming here. The time is planned according to your soul's calendar, and Death cannot occur one moment before that time is reached.

'There is no such thing as a premature or unplanned death, and unpleasantries associated with death are largely of the human imagination. Even those who die violently are spared from heinous suffering mainly due to God's intervention. Their souls are cast out of their bodies at the time of inevitability, long before any suffering could set in. Their disassociation with the event occurs because they're already focused upon the realization of that which follows after the physical existence. The fascination they have in experiencing their newfound life, following death, removes all concentration from the suffering that the human seems to undergo at the moment of death. We assure you that all of this comes from the compassion of the Great Creator, who is with us all, always."

If a child you care about has been labeled as having ADD or ADHD, and medication has been recommended or prescribed, call upon Archangel Metatron to see if alternative treatments are viable:

"Archangel Metatron, I ask for your powerfully loving intervention in helping [name of child], who has been labeled as 'disordered.' Please help us to know God's will for this child and guide all of the adults involved to do what's best for the child. Please help us stand strong among authority figures, and to do what we know is right. Please help all of the adults involved in making decisions on behalf of this child engage in harmonious discussions, even if there are differing opinions. Metatron, please protect this child from any harm, now and in the future. Thank you!"