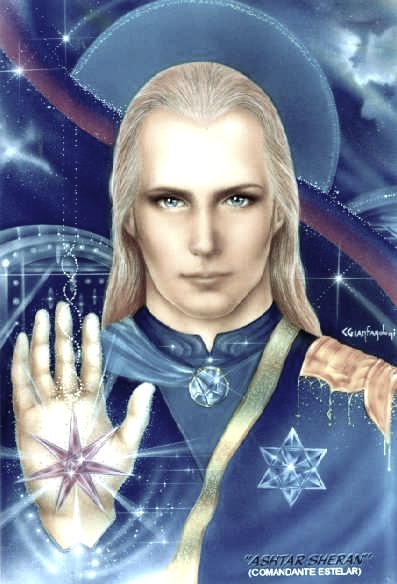 Click on the image to see another pictures of Ashtar

Ashtar
(New Age)
Also known as Commander Ashtar.
Ashtar is a human-looking mediator who works with extraterrestrials and humans, helping to create a peaceful Universe.


Ashtar is a member of the Great White Brotherhood [see the Glossary], and he works closely with Jesus, Archangel Michael, and Saint-Germain. Like a nightclub bouncer, Ashtar protects Earth from negative visitors or energies from other planets. He's involved with ensuring peace between planet populations through the Intergalactic Federation. He also heads a group of humans and extraterrestrials known as "the Ashtar Command."

Ashtar's mission is to avert nuclear war on Earth, which would have I a negative ripple effect across many galaxies. He wants to help humans reach their highest potential (a process known as ascension) and be completely focused on Divine love. Ashtar guides humans away from third-dimensional thinking that believes in limits and restrictions and is focused on time measurement. He also gives personal guidance on how to stay safe and calm during the many changes occurring on Earth.

I attempted to contact Ashtar several times and was told that the best time to reach him was on a clear, starry evening, or while flying at high altitudes in an airplane. So I decided to combine the two and communicate with him while flying at 30,000 feet at night!

I've seen Ashtar and have been aware of his presence with many of my clients, especially those whom I call "Starpeople" (those who have a connection to other galaxies). He's the pale man with white hair portrayed on the "Support" card in my Healing with the Angels oracle deck and on the cover of my book about Starpeople, Earth Angels.

"I'm here," Ashtar said to me when our connection was complete. "You felt me as warm love before you could hear me. I come from a different dimension, one that your conscious mind—while existing in third-dimensional, time-warped thinking—cannot as easily grasp as your soul can during its nightly sojourns to visit us for a higher education.

"I won’t encroach upon your missions, but I'm here if you need me. I promise to keep you safe from all outward invasions."

Ashtar is easiest to connect with at night, when the stars are illuminated in the heavens. Hold your intention to contact him in your mind, and he'll come to you. If you have fears concerning aliens, Ashtar's presence with you will be subtle, as he's a loving being who doesn't want to evoke fear in any way.