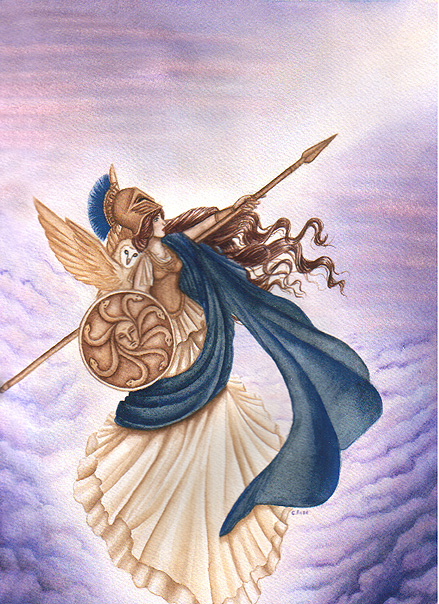 Click on the image to see another pictures of Athena


Athena is the daughter of Zeus, and her temple was the Parthenon. Legends discuss Athena's courage and intuitive wisdom during battles. In artistic renderings, Athena is usually depicted with a breastplate, shield, and sword, and often accompanied by an owl. This bird has come to be associated with her, perhaps due to her wisdom.

When she bears the extra title "Pallas," Athena is known as a warrior goddess who protects, and who inspires women to exhibit their inner strength and have the courage to stand their ground. She encourages humans to use intuitive wisdom, rather than anger or violence, to heal arguments. In New Age teachings, Pallas Athena is regarded as an ascended master of the fifth ray of light, which is the ray concerning truthfulness and integrity.

When I called upon Athena, I saw a beautiful woman standing in a single-person chariot with metal wrist cuffs and a metallic headdress. Her energy was very intense, and she was panting, as if she'd just completed a sizable task.

"No job is too big for me," she said bluntly. "I'm a taskmaster who gets the job before me done to full completion. Often I delegate to star beings."

Athena pointed out the stars in the sky, referring to them as sweet, living beings bearing the souls of innocent, loving children who are devoted to helping Athena. "The whole universe breathes," she said in response to my unspoken questions about the stars. "It reverberates with life, and there's no place where life is not—it is a continuous pattern of evermoving energy that is everywhere, without exception. And that is how I handle my tasks at hand: by commanding the energy with the firm, loving touch of a determined parent. You can do the same."
Helps with:
INVOCATION

One way to invoke Athena is to say:


"Athena, I need your assistance, and request your powerful presence, please. Beloved sister, I ask for your intervention in my life. Please infuse every part of my existence with graceful strength: my thoughts, movements, relationships, and all situations with which I'm involved. I ask that you help my friends and family to accept and honor my new-found power. Please help me harness and use this strength in peaceful and loving ways. I thank you!"