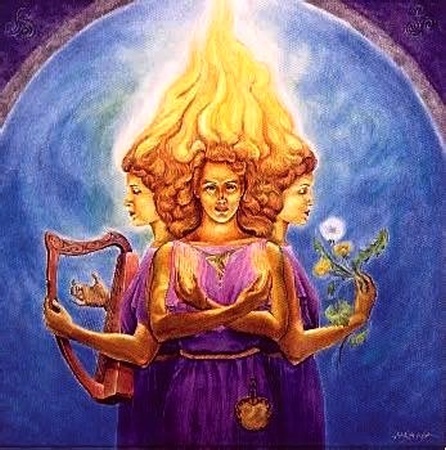 Click on the image to see another pictures of Bright

Bright
(Ireland, Spain, France, and Wales)
Also known as Brid, Briyhid, St. Brind, Brigantia, Mary of the Gaels, Bride, Brigid.
Brigit is a warrior goddess who has struck a perfect balance of femininity and no-apologies power. Depending upon whom you ask, her name either means "the bright one," "the bright arrow," or "the powerful one." All of these names describe Brigit perfectly.


Originally a highly respected Celtic goddess afforded much acclaim in ancient Ireland, Brigit had a shrine erected in her honor in the town of Kildare, where women tended to a flame that burned continually. In the fifth century, Brigit was adopted by the Catholic church and was deemed "Saint Brigid."

Brigit is the female equivalent of Archangel Michael, fiercely protecting and lovingly clearing those who call upon her. Like Michael, Brigit also inspires Divine guidance and prophetic information. She's the half-sister of the Celtic love god, Aengus, sharing the same mother with him. Brigit is known as a triple goddess of the flame who uses her flames to help purify us; and increase fertility, creativity, and promote healing. "Triple goddess" means that Brigit has three different personas or aspects, as if she's three different people, each with distinct duties and specialties.

Brigit is a sun goddess, associated with fire. When she's in your presence, you may feel hot and actually begin to perspire. Brigit is celebrated each February 1 during an event originally known as "Imbolc," the rite to usher in springtime and welcome the birth of new livestock.

I invoked Brigit while sitting by the Irish sea on a hot summer after-noon. Brigit appeared as a fiery redhead with beautiful, long, wavy hair. Her intensity surprised me at first, yet it was accompanied by loving, confidence, like the sun that merely burns without any hint of anger, fear, or urgency. Brigit reminds me of a combination of Mother Mary, with her graceful feminine love, and Archangel Michael, with his no-nonsense commitment to purpose and protection. She's a "super-mother," one who's simultaneously accessible and loving, yet fiercely protective without fail. I get the feeling that nothing can get past Brigit's impeccable protective power and energy.

She says: "I'm the embodiment of fiery devotion to the good people of the planet Earth. At one time, I walked upon Earth, and my heart was broken in many ways by careless and thoughtless actions against myself, my people, and the land. The rest of my time I devoted to trying to understand human nature. I now have insight into the 'nature of the beast,' if you will, of the human heart. I see that its frailty lies in indecision and worry. Cast, therefore, your cares onto me, and I shall carry them away.

"Humanity is heavy with grief now over the loss of innocence [Author's note: To me, this sentence seemed like a post-September 11 reference] and the many rivalries that have been invented and imposed. These are artificial boundaries, and the committee with which I work seeks to blur the lines of these boundaries to build unity and salvation. Devotion to oneness at this time is essential, a single-pointed focus upon the One. Inside of each of us is a savior. Learn to invoke your internal savior as a counterbalance to cares and worries. Watch how this inner deity quietly and discreetly intervenes.

"It's with these workings that we all come together—we who oversee the Mission on a grand scale, and all of those upon the planet who hold great desires to bring goodness home. This teamwork is built upon the framework and understanding of our oneness. It isn't difficult to understand the mechanics of these workings, as they're orchestrated for your higher good. I call it the workings of 'inner salvation—instead of simply focusing upon improving outward situations and other people's lives, try this instead: Go inward and explore the inner mission, the inner territory, the inner deities. "

You can contact Brigit at any time; however, it's especially effective to light a candle and stare at its flame as you say:


"Great Brigit, I know that you hear me the moment that I think of you. I ask for your presence and assistance. Please lend me your courage and power so that I may rise to the level of my highest capabilities. Please warm my heart and mind with your brightness, and burn away any thoughts, feelings, or behaviors that stand in the way of my Divine potential. Help me to have the courage to be my very best, and to lose all fear of being powerful."