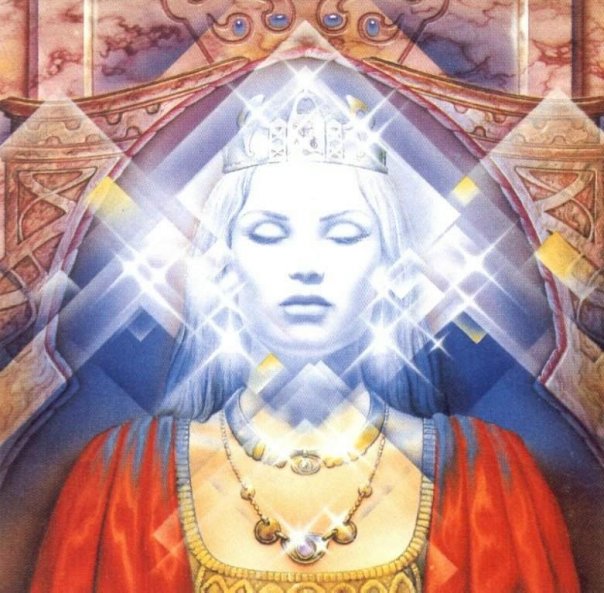 Click on the image to see another pictures of Dana

Dana
(Iceland)
Also known as Danu, Danann.
Dana's name is rooted in the Old Irish word Dan, which means "knowledge." She is a powerful Celtic creator goddess, believed to be a Great Mother aspect of the Divine Creator. Historians say that she has the most ancient roots of any Celtic deity, esteemed by the pre-Gaelic Tuatha De Danaans, a group of alchemists in Ireland. When the Gaelics overtook Ireland, legend says that the Tuatha De Danaans became the leprechauns who today inhabit Ireland.


When I invoked Dana while sitting on a bluff overlooking the Irish sea, I first saw a coat similar to one that a king might sport—regal and bejeweled. Next, I saw a king's crown. "But Dana is a female deity!" I mentally protested. Then I saw her—not as I expected her to look (my mental image was that she'd look like someone's eccentric aunt). Instead, I saw a rational, young-looking woman who emanated wisdom and intelligence.

Dana placed the crown on my head and the coat over my shoulders. I started to argue, but she stopped me. "You're all royalty," Dana explained, meaning all of humanity," and you need to allow me the honor of dignifying you all with my services."

I could tell that Dana didn't mean that she'd perform every feat of manifestation for us, but she assured me that her energy was "magically intertwined with each act of magical manifestation." She said, "Remember that I'm just another aspect of God, and that your Western master teacher Jesus taught you that you are all gods. "

Dana showed me wavelengths of energy, all intertwined like parallel lines of rope, and said that each of us was part of those wavelengths. Her wavelength was often the foundation, bottom, or supporting line of energy that we could rest upon. "Let nature do its course as you perform miracles," she added. And again she emphasized that we're all kings, queens, gods, and goddesses . . . deities in our own right: "You're deities in the making, as you test out your own skills with chaperones like me by your side."

Wear, look at, or hold something that makes you feel abundant— or even better—that makes you feel like royalty. This could mean going to a jewelry store and trying on a beautiful ring, or looking at a photograph of an opulent estate. Imagine yourself with unlimited resources, and feel a sense of total financial security. Even if you can imagine and experience this sensation for just a brief time, that's enough. Then mentally say to Dana:

"Dana, thank you for lending me your magical abilities, which I now use in the service of joy, fun, and support of my Divine mission. Thank you for your generosity in showing me how to accept these resources, and how to enjoy them. Thank you for helping me receive without guilt, and to know that I deserve this attention and support and that it will ultimately allow me to help the planet."