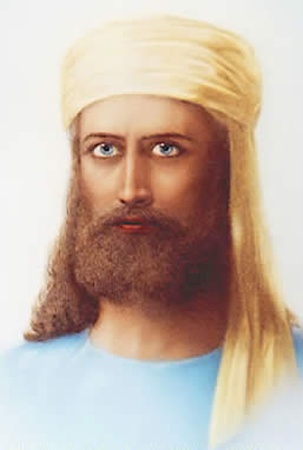 Click on the image to see another pictures of El Morya

El Morya
(Theosophical Society; New Age)
El Morya is a new ascended master, first recorded in the 1880s by Madame Blavatsky, founder of the Theosophical Society, and repopularized in the 1960s by Mark and Elizabeth Clare Prophet and other authors of the "I AM Teachings."


El Morya appears to be based upon an actual man named Ranbir Singh, son of Raja Gulab Singh, who was the ruler of Kashmir in the 1840s. Kashmir was threatened with takeover by the British in 1845, but Raja Singh paid a ransom to convince the British to leave the country alone. When the Raja died in 1858, Ranbir became Maharaj of Kashmir.

Historians hail Ranbir for unifying the states of Nagar and Hunza, and for creating humane and fair civil and criminal laws. Ranbir was quite popular among his constituents. He passed away in 1885, the same time that Madame Blavatsky was writing her channeled books about the ascended masters. Blavatsky claimed to have spent time with El Morya in India, and she may have been protecting a friendship with Ranbir by giving him a pseudonym.

Blavatsky's Theosophical Society defines the term Morya as "the name of a Rajpoot tribe, so-called because of its being almost altogether composed of the descendants of the famous Moryan sovereign of Marya-Xagara. The Moryan Dynasty began with certain Kshatriyas of the Sakya line closely related to Goutama Buddha, who founded the town of Morya-Nagara in the Himalayas." Blavatsky, and later, Elizabeth Clare Prophet, did make reference to El Morya being a "Rajput prince" and a "Tibetan Mahatma," both apt descriptions of Ranbir.

When I invoked El Morya, he came to me rapidly in a most extraordinary way. The man that I saw closely matched the paintings that Blavatsky had made of El Morya, although I purposely didn't look at her artwork until after my channeling of El Morya.

"Put aside your cares, concerns, and worries, and come to me," I was told. A brown-skinned man, slightly heavyset with a glowing smile of love and arms outstretched, faced me. "Let me embrace you and perform an energy transfusion, replacing faithlessness with faith.” I melted into his young-grandpa-like embrace, felt my breath become deeper, and experienced a tingling sensation throughout my hands, wrists, calves, and feet.

El Morya explained that he was surmounting my inner obstacles, which he said were walls of defenses that I'd built up as misguided shields. "So much better to use these instead," he said, holding up two beautifully ornate shields. "This is a heart protector, and this one is for the small of your back—two vulnerable areas for lightbearers like you. Through a form of psychic surgery, I shall permanently install these shields deep into the chasm of your being, protecting you from harm of any sort.

"These shields will allow problems to roll off of you like butter on a heated surface." He explained that these shields were a buffer to tone down impulsiveness based on emotionally based decisions not tempered by wisdom.

"I'm so glad that you called upon me, and I invite all who read these words to do the same. I shall install shields at their request, individually attuned to each person’s energy field. The shields can always be removed at the blink of an eye, should you say the word. However, I'm certain that you'll feel much better and more grounded as a result, and will be comforted by their placement."

"Beloved El Morya, who serves the Divine light, please come to me now. Escort me to the place of selfless service where Divine assignments are made. Shield me from the negative thoughts of my own mind, as well as negative energy in general. Help me stay centered in my commitment to learn, grow, heal, and teach with a positive intent and positive energy. Thank you."