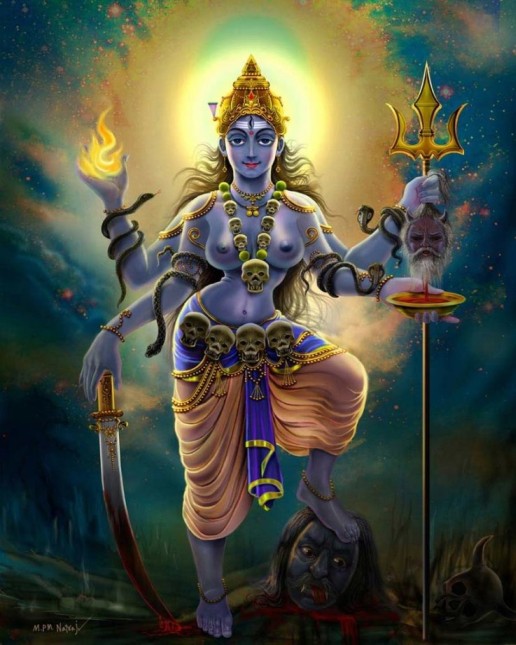 Click on the image to see another pictures of Kali

Kali
(Hindu; India)
Also known as Black Mother, Kali-Ma, Raksha-Kali.
Kali is a Hindu aspect of Devi, who is the ultimate goddess. Kali is the goddess of the endings of cycles, the death and transformation energy that lets go of the old and brings in the new. Some are threatened by Kali's seemingly destructive power; however, Kali is actually a loving energy that helps free us of fear. She only destroys that which could keep us in bondage, or which could slow or divert our Divine mission, in the same way that a loving mother would take away dangerous items from her children.


Kali has the personality of a high-energy, supercharged woman on a clear mission. She has an impatient artist's temperament, like a stage mom who knows what needs to be done and doesn't have time to argue. She says, "My passions have overwhelmed many who have likened me to a silver storm of fury. They've called me fickle, temperamental, and wrathful. Yes, my passion does have an edge, as it is forthrightness unleashed.

"I say, 'If you aren't willing to help me, or let me help you, then at least get out of my way. When you invoke me, get ready for unbridled action. It may feel like I push you along too fast, and it may feel unsafe. But I assure you that I'm simply helping you through doors that open so that we can proceed as light-beings. We have much catching up [with the mission] to do, and dilly-dallying only further thwarts our efforts.

"Do not procrastinate, delay, or fear the change that always accompanies action and moving forward. Do not be afraid of making the wrong decision; rather, fear living in indecision. I am Kali, single-minded focus mixed with fiery passion and deep caring about many causes."

Kali told me that she, like a lot of women, has been called a "bitch," when she's simply being powerful and unwavering.

Kali comes immediately if you think of her name: "Kali, Kali, Kali. She arrives like a sudden and powerful rainstorm, with purpose and determination. She's excellent at extracting the heart of the problem from any situation presented to her. So, if you tell her that you want help with your love life, for example, Kali will see the true underlying issues. She’ll give you very clear, forceful direction, without mincing any words.