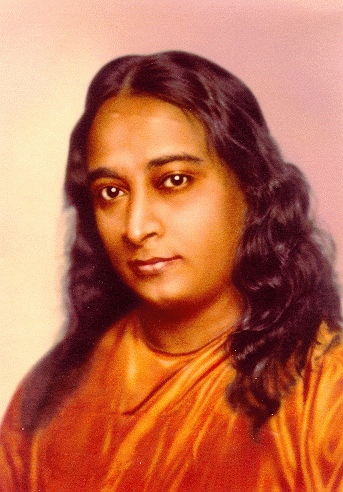 Click on the image to see another pictures of Yogananda

Yogananda
(India, North America)
Paramahansa Yogananda was an Indian yogi born in 1893. In 1920, at his teacher Babaji's request, Yogananda traveled to America to introduce the Western world to the practice of Kriya yoga. He wrote the popular book Autobiography of a Yogi and opened Self-Realization Fellowship (5RF) centers worldwide. Yogananda's centers, books, and teachings blend Eastern and Western spirituality, and many of his writings quote Jesus Christ as an example of love, compassion, and forgiveness. (In fact, Jesus is one of the six gurus of SRF, the other five being Yogananda, Krishna, Babaji, Lahiri Mahasaya, and Sri Yukteswar.) Yogananda, like Babaji, teaches that all religions have an underlying unity.


Yogananda's legacy includes bringing yoga to North America and introducing Westerners to meditation and chanting. All of his teachings focused upon developing loving connections and communication with God; and living a happy, healthy life.

Yogananda passed physically from the world in 1952, but he continues to teach, heal, and guide people as one of the newer ascended masters.

My dear friend Michael Wise, lead singer for the band Angel Earth, wrote down his accounts of working with Yogananda, and sent me the story just two months before he passed away. Now Michael is with his beloved Yogananda.

"My experience with Guruji Paramahansa Yogananda began in the spring of 1992 when his book Autobiography of a Yogi literally fell off of the shelf of a local bookstore into my hands. I purchased the book and was enthralled with its contents. I then began studying Yogananda's Kriya Yoga meditation technique through his Self-Realization Fellowship.

"It was in the early morning, 4:30 A.M. of a winter's day in 1994, during my daily meditation routine before going to work, that I reached a very loving and sacred place. My diligent practice and trust in Yogananda's teachings brought me to a level of meditation that I'd never before known. In what seemed like an instant, I was transported to a place of serene beauty: a sun room with a huge arching window overlooking a garden rich in colorful flowers, trees, and sunlight as bright as I'd ever seen. I just stood in silence amazed at the sight, sound, and feeling of the experience.

"Then, just to the left of the window, I noticed a small table with four chairs around it. In the chair to my left and the one at the back of the table, two figures appeared. They were moving and seemed very alive, and then they came into sharper focus. I was very startled as I recognized one of them to be Yogananda himself! He looked up at me and smiled, then I heard a voice call my name—it was the other figure, who suddenly came into focus. 'Michael,' the voice said, and then I recognized the other figure to be Jesus! Jesus called my name again and smiled and gently said to me, 'Be as a child at play.'

"Yogananda then leaned forward and added, '. . . and continue to study my lessons.' Both smiled at me. I was then gently returned to my place in my basement studio in my home. The experience is still very vivid in my memory as I write this in May of 2002. Both Yogananda and Jesus have been with me every step of the way of my awakening to the Spirit within. They're with me now and always will be as we share this experience of transformation here on Earth."

Yogananda is actively and deeply involved with world affairs, and comes to anyone who desires to bring peace to the planet. The best way to reach Yogananda is through meditation. Meditate while mentally repeating the word love and simultaneously holding the intention of contacting him. You may then see a mental vision of Yogananda and have the experience of conversing with him. During this conversation, you could ask Yogananda for Divine direction about your spiritual path or any other question or concern you may have.