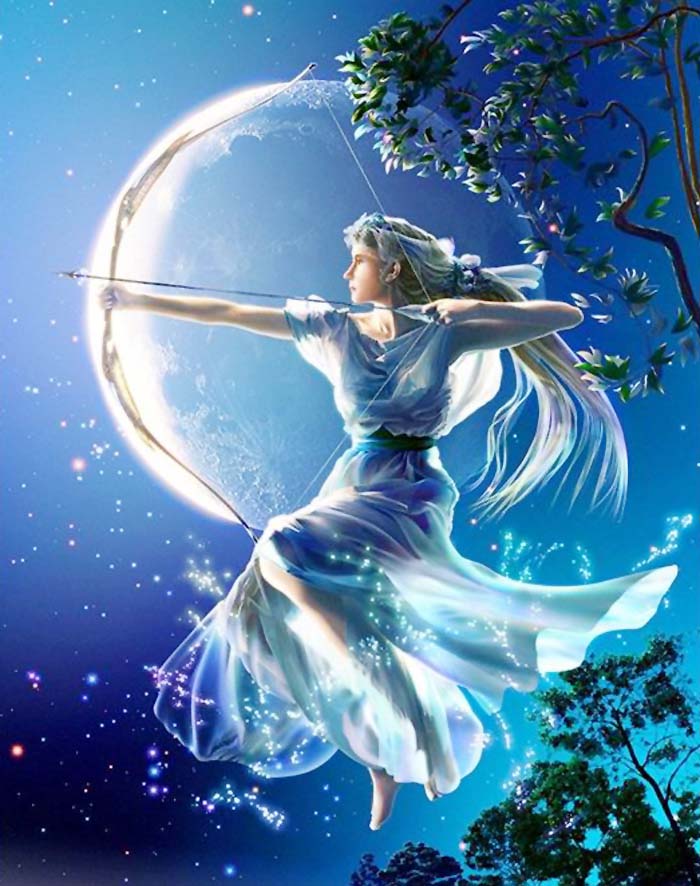 Click on the image to see another pictures of Artemis

Artemis
(Greece)
Also known as Artemis Calliste, Delia, Luna, Mother Artemis, Phoebe.
A Greek goddess of the new moon, with parallels to the Roman goddess Diana, Artemis is the daughter of Zeus and Leto. Her Brother is Apollo.


Known as "the Huntress of Souls," Artemis carries a bow and arrow аnd spends most of her time in nature with the wood nymphs. She's a protectress of anyone who calls upon her, and particularly defends unmarried young women, children, and animals. However, she always protects nonviolently, using wisdom as her sole weapon. She's considered a nature, fertility, and moon goddess.

Artemis sets her sights on her goals, and as a result, she's a powerful manifestor. She teaches us the importance of spending time in nature, and to follow our intuition as we strive to become more natural and authentic humans.

I called upon Artemis just after the new moon.

"Power can be paralyzing," replied the pixielike woman with short-cropped hair, a beautiful large-eyed face, and ears slightly pointed on the top. She seemed to be captivated with hunting something, but I knew it wasn't an animal or a person. Artemis then told me that she was hunting metaphorical gold: "I track down wisdom and experiences that I can later recount to children in the form of fairy tales. Today I'm mostly concerned with helping wisdom grow in upcoming generations. The children are unsure of their boundaries and limits. They know that they have power that can exceed that of their parents, so they hold back, unwilling to release this mighty power, for fear of overpowering their adult guardians.

"Children today feel unsafe unless their parents are more powerful than they are. That's why I work dually alongside parents of the young. I encourage them not to perpetuate a battle of wills with their offspring, but to assume their power for the sake of their children's own awareness and to balance and use their power with love. "

Go outside to call upon Artemis—preferably, stand barefoot on the earth, sand, soil, or grass. Then say:

"Artemis, I ask for your companionship and guidance in helping me open up my natural intuition and my feminine strength and power, which resides within each man and woman. I open my arms to your friendship and leadership. Help me reconnect with nature and my natural self. Help me honor my true feelings and stand up for what I know to be true, deep in my heart. Help me to be strong, wise, and beautiful in all ways. Thank you."