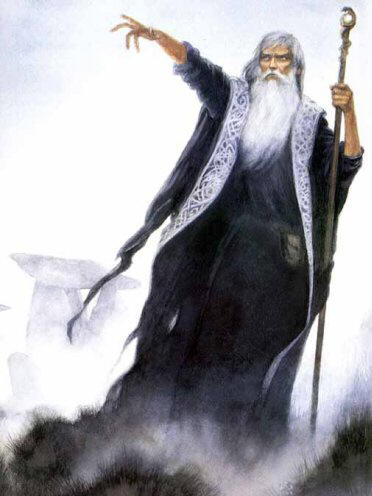 Click on the image to see another pictures of Merlin

Merlin
(Celtic; United Kingdom)
Also known as Merddin, Myrddin, Merlyn, Emrys.
A controversial figure did he really live, or was he merely a legend?—Merlin represents the great old sage-wizard archetype. He’s known as a powerful magician, a spiritual teacher, and a psychic visionary who helped King Arthur during fifth-century Camelot in Wales. He's associated with the goddesses of Avalon and Glastonbury, including Viviane, Guinevere, and The Lady of the Lake.


Those who question his reality as an actual human being say that Merlin may have been based upon an ancient Druid mystic. In any event, biographical information about him is seemingly nonexistent. However, many divinities didn't lead physical lives, but they're still quite powerful and real among us in the spirit world. Merlin is one of them. Although some New Age philosophers argue that Merlin was an early incarnation of Saint-Germain, I and many of the peers whom I respect have interacted with Merlin's spirit as a personality quite distinct and apart from Saint-Germain.

Merlin is happy to give lightworkers a magical leg-up; however, he always cautions that we use our "inner wizards" in the name of spiritual service and not for self-gain.

I thought it was fitting to ask Merlin to speak to readers of this bock while I sat at the Stonehenge circle in England. He said, "Welcome to the Mystery School, where both dark and bright mysteries reside together. I'm the champion of both dark and light, recognizing the power within both forces if they're approached fearlessly, but with uncompromising respect for their force. If it's an increase in magical knowledge, spell-casting, or inner strength or power that you seek, by all means call upon me. I'm pleased to teach and guide, but be aware that I'm perceived as a powerful taskmaster, one who doesn't take lightly to gluttony or indolence. Be prepared to work hard without compromise when you invoke me. "

During his mortal lifetime, Merlin rarely spent time indoors. He frequently left Camelot to meditate by himself in the forest, and only went back when he was called upon by Arthur and others for assistance. For this reason, it's best to invoke Merlin when you're outside, especially among trees.

Before you even call on him, Merlin knows of your intentions. He knows who you are, what situation you're requesting help with, and the best solution. But he waits before approaching you, first scanning you to see if you're a student who's willing to learn over the long haul—or if you're someone who just wants a quick fix.

Merlin comes to those who have a sincere desire to learn the spiritual secrets of alchemy, Divine magic, and manifestation skills that will be used in the light and not for personal glorification. He emphasizes to his students that these skills must never be used to harm or destroy anyone or anything physically or emotionally. Merlin's knowledge is his prized possession, and he shares it willingly with those whose hearts are loving and pure.

It doesn't hurt to call upon Merlin even if you're not sure that you're ready. He knows. Simply think his name and mentally ask him to come and assist you. If you're ready to learn and work, you will feel his presence and mentally hear his words. If you're not ready, Merlin will guide you to an archangel or master who can prepare you for readiness. Either way, thank Merlin for his loving care.