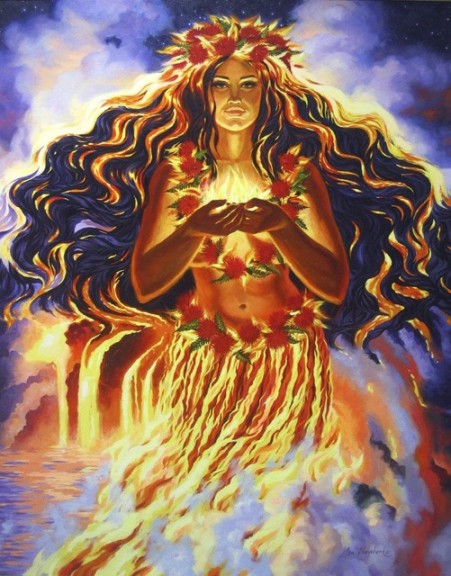 Click on the image to see another pictures of Pele

Pele
(Hawaii)
Also known as Ka'ula-o-ke-ahi: Redness of the Fire.
Pele is the fire goddess who rules Hawaii's volcanoes and takes various forms: a young, beautiful woman; a wizened crone; a dog; and a flame. In the Hawaiian islands, Pele is highly respected as a powerful deity.


Many legends surround Pele's origination. A common theme is Pele's sibling rivalry with her older sister, Hiiaka, goddess of the ocean. When Pele decided to use her firepower to bring land up from the sea to create new islands, her sister battled her. Hiiaka poured water onto Pele's beloved lava, and steam from the two warring sisters poured out of the volcanoes.

Other tales are of Pele's tragic love affairs with mortals and gods. The lava is said to be Pele's hair and tears from her anguish over her love life. It's been said that taking lava rocks from the Hawaiian islands will result in Pele's wrath. Supposedly, many tourists have mailed back lava to the islands to undo bad-luck streaks that occurred after bringing the lava home.

Pele is a powerful yet trustworthy goddess who helps us tap in to our passions and true heart's desires. In Kona, she told me, "We each have burning fire within us, fire that when properly channeled, fuels us with passion and a sense of purpose. If we deny ourselves as we follow our desires and passions, we may erupt in a volcano of fury. Even then, however, we can turn our anger and indignation into creative forms of beauty, much like when my lava flow hardens and turns to rock, allowing new soil and extensions of my islands to be formed."

Pele also helps us be more honest in relationships, especially when we're feeling angry or hurt. She knows that if we keep our feelings buried within us, the hidden anger will smother and extinguish the flames of passion, or else explode like a volcano. Ask her for guidance when you need to tell someone that you're angry with them so that you can keep the passion in that relationship alive.

As the goddess of sacred fire, Pele helps us burn a flame of passion in our careers, relationships, and lives as a whole. If you feel that your life is colorless in any way, call upon Pele for help. First, light a warmcolored candle (such as red, orange, yellow, or white), then stare at the flame and say with great reverence and respect:

"Sacred goddess Pele, I ask for your help in reigniting my inner flame. Help me be illuminated with passion for life. [If you have a special project or relationship that you'd like to get enthusiastic about, describe it to her now.] Help me temper this passion with loving kindness, and summon up the courage to speak my truth if anger arises within me."