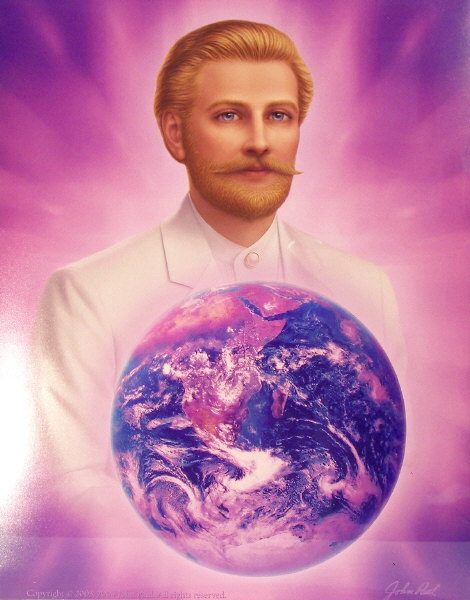 Click on the image to see another pictures of Saint - Germain


His real full name is Comte de Saint-Germain, or The Count of Saint-Germain. He was a man born of royal blood somewhere between 1690 and 1710, although reports conflict as to his parents' lineage. Some say that his mother was Marie de Neubourg, the widow of King Charles II of Spain, and that his father was Comte Adanero. Others (particularly those associated with Theosophy) hold that his father was Prince Ragoczy of Transylvania. A few reports say that he was Prince Ragoczy. Still others claim that he's a Portugese Jew.

Regardless of his origin, history shows that Count Saint-Germain rubbed elbows with high society and European royalty. He was multi-talented, playing the violin like a virtuoso, giving psychic readings, mastering numerous languages, and painting exquisite artwork. He also spent time studying and teaching occult and alchemy subjects, and he was involved with the founding of several secret societies, including the Freemasons. He boasted of being able to turn lead into gold, and to know of a secret technique to remove flaws from diamonds while increasing their size.

In addition, Saint-Germain gave his friends elixirs that would supposedly erase wrinkles and restore youth. This might be true, as most reports of note say that he looked like a youthful middle-aged man throughout his life. It's also said that, although he frequently dined out with friends, he never ate in public. He told many people that the only food he ever ate was a special oatmeal concoction that he made at home.

Reports say that Saint-Germain was quite wealthy, although no source of his wealth was ever established. He was enamored with gem-stones—or were they crystals?—and he carried them with him, often giving them as gifts. He painted gems in his artwork in strong, bold colors.

Saint-Germain kept details about his birth and personal history private, and he was considered a fascinatingly mysterious man in his day. Occasionally he'd make references to past lives—for example, saying that he was with Nero in Rome. He also remarked that he'd return to France in 100 years. Prince Charles of Hesse-Kassel, whom Saint-Germain lived and practiced alchemy with, reported that the count died at his castle on February 27, 1784. However, many credible accounts show that Saint-Germain was seen several years later. For instance, official Freemason documents reportedly show that Saint-Germain was the French representative at their 1785 convention.

Saint-Germain was also deeply involved in French politics and worked alongside King Louis XVI on several missions. It's believed that he (Saint-Germain) was partially responsible for Catherine the Great taking the throne.

A visionary who offered his psychic visions freely, Saint-Germain gave private readings to royalty and those of social influence. For example, he told Marie Antoinette of his prophecies about the French Revolution 15 years before it occurred. Occasionally Saint-Germain's behavior and eccentricities got him into trouble, and he was arrested at least once.

Some people believe that Saint-Germain attained immortality, and that he faked his death to avoid attracting undue attention. Annie Besant, one of the original Theosophists, claimed to have met him in 1896. Guy Ballard, whose pen name is Godre Ray King, wrote about meeting Saint-Germain at Mount Shasta, California, in the 1930s. Recently, Elizabeth Clare Prophet wrote and lectured about Saint-Germain, emphasizing her belief that he carries a violet flame to transmute lower energies.

The "I AM Teachings," a New Age work related to the Great White Brotherhood [see Glossary] considers Saint-Germain's role in history highly important. In New Age circles, it's believed that his past lives include Joseph, father of Jesus; Merlin; Shakespeare; and Christopher Columbus. He's regarded as being the Lord or Chohan of the Seventh Ray, which is the high-frequency violet color in the hierarchy of color vibrations. In other words, he's a very important figure in the ascension movement for the human race and the Great White Brotherhood.

My first remarkable experience with Saint-Germain happened while teaching a beginning psychic-development class in Atlanta. Students were paired up, facing each other, giving each other readings. When the students were done, I asked them to share their experiences with me. A woman in one corner of the room raised her hand. She was a Jewish woman who was new to New Age teachings. Her partner during the reading was a Catholic priest from England who'd flown to Atlanta to take my class.

"Who is Saint-Germain?" the woman asked me. Neither she nor her partner had ever heard of this man who'd come through their reading so strongly.

I've come to know Saint-Germain as a loving, benevolent ascended master who wishes to work with lightworkers—that is, people who want to help the world clean up its act. He provides guidance, protection, and courage. If those sound like qualities that Archangel Michael provides, it's no accident, since the two work hand-in-wing together.

In my experience, people don't call Saint-Germain—he's the one who calls first! He seems to just show up wherever lightworkers are gathered in classes, study groups, or prayer meetings. He works with spiritual teachers to encourage their outgoing nature and leadership skills.

That's not to say, however, that you can't request a special audience with him when you desire a message or some type of motivation. Simply think, Saint-Germain, I need your help. Wait a moment, and then mentally let him know the situation or question with which you need assistance.

You'll know that he's with you because a creative answer will come to you suddenly. You may also see violet-purple sparkles of light in the room. Or, you may start seeing violet-purple everywhere you go, on people's clothing or on flowers, for instance. You'll also begin thinking or writing profound thoughts on how to help others.

"Saint-Germain, I need your help."