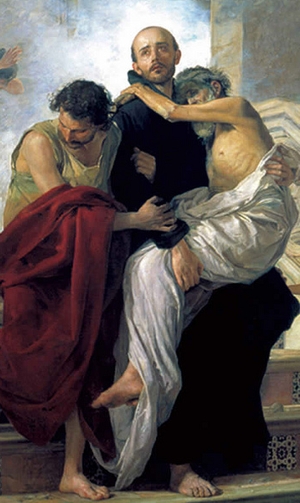 Saint John of God
(Catholic)
Also known as Joao Cidade, Juan Ciudad, Father of the Poor.
Saint John of God is the patron of the mentally and physically ill and hospital employees, and he also helps booksellers and those with heart ailments.


He was born Joao (which means "John" in English) Cidade, in Portugal in 1495. At age eight, he and his family moved to Spain. As a young man, he worked as a shepherd, a soldier, and a traveling book peddler. In 1538, he had an epiphany after hearing John of Avila speak on repentance. Joao gave away his money and belongings and was sub-sequently hospitalized in a psychiatric wing of the Royal Hospital.

In his opinion, the hospitalization experience was degrading and dreadful, and he decided to devote his life to upgrading hospital treatment. After his release from the hospital, he was homeless and disillusioned, which helped him develop a very strong affinity with other homeless and disenfranchised people.

Joao worked tirelessly to reach many people who suffered from illness (mental and physical) and deprivations of all types. In the beginning, when the weather was inclement, he would share the porch of a friend's house with those needing shelter. This began The Hospitaller Order of Saint John of God, which today, 450 years after it was founded, continues to provide shelter to people throughout the world.

He also bought a facility and cared for poor, homeless, sick, and unwanted people in his new hometown of Granada, Spain. Joao was known to give what he could, beg for those who couldn't, and even help carry those who could not walk. His motto was: "Labor without stopping. Do all the good works you can while you still have the time," and he was known to counsel others by citing the Biblical verse: "Whatever you do to one of the least of these, my brothers and sisters, you do to me."

When someone was admitted to his hospital, legend says that he or his staff would wash the person, feed them, and then pray with them. Empathetic and encouraging, he listened to everyone's problems and offered his most sincere advice. People were so impressed by his dedication and honesty that they gave him money and volunteered to help him in his ministry. It was these people who gave him the title "John of God." Using his position with the powerful, he advocated successfully for the poor to improve their condition. Due to contributions and the work of dedicated volunteers, John of God's mission continues to spread the message and the practice of "hospitality." John died of pneumonia on March 8, 1550, while immersed in prayer after saving a man who'd almost drowned.

Saint John of God is a jolly fellow who exudes joy. Just calling upon him is enough to elevate the mood and lift the spirits. He reassures those s who are depressed or worried, and helps people feel physically, emotionally, and financially safe and secure. Invoke him at the first sign of sadness, or to heal a broken heart.

Saint John of God conies to anyone of any religious or spiritual faith who calls upon him, just by thinking of his name. You can also ask him to visit your loved ones or clients who are depressed or anxious. Or, you can hold this prayer in mind to call him to your side:

"Golden-hearted Saint John of God, please bring me the joy of God, which you exude. Please surround me with your loving care and attention. Help me banish pessimistic thoughts and attitudes, and rise above the appearance of problems. Help me trust in Divine order and let go of the need to control. Please help me have a mind filled with faith, a heart filled with joy, and a voice filled with laughter. Please guide me so that I may live your legacy of helping others and serving God. Amen."