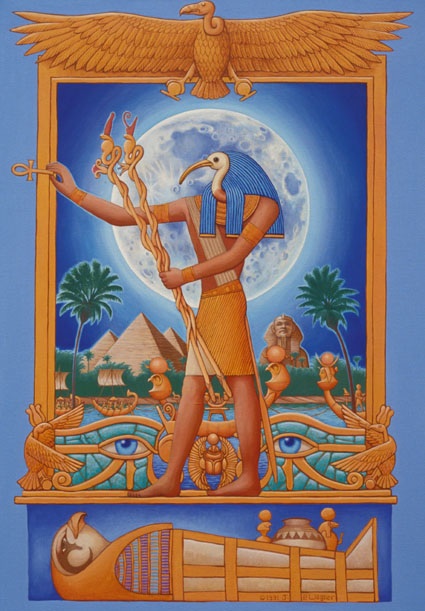 Click on the image to see another pictures of Thoth

Thoth
(Egypt)
Also known as Aah, Aah Tehuti, Djehuti, Tehuti, Thout, Zehuti.
The Egyptian god of high magic, manifestation, symbols, geometry, writing, music, and astronomy, Thoth was the scribe of the gods, and he penned many books about Hermetic secrets of magic and manifestation. Legend says that one of his books, The Emerald Tablets, was written when Thoth was a priest-king in Atlantis. Thoth and the book survived Atlantis's demise, and he founded an Egyptian colony based on Atlantean wisdom.


It's said that Thoth's symbols are the basis for modern Freemasonry, and that he designed many Egyptian pyramids and temples.

Thoth was believed to materialize and heal with the use of chants, toning, and sound, along with sacred geometry, symbolism, and arithmetic. He taught the moon goddess, Isis, how to practice high magic, and he's credited with being the inventor of writing in ancient Egypt.

He says, "You speak of Atlantis as being a peak of human knowledge, yet there are far greater cultures than these that existed on this planet and beyond. I've participated in several, and I shall continue to do so for service, sport, and adventure. The human 'race' is fast drawing to its finish line, and it's time for all of us to withdraw and go home. This is the natural cycle and evolution of every great culture—to reach its peak and then withdraw, like seasons of life itself. Expansion, withdrawal, expansion, withdrawal. Do not fear either route, for your [he meant everyone's] safe passage is assured. You will be applauded for your participation, which takes courage and bravery indeed.

"My words are not to alert you to mass destruction, but to thrust upon you an imperative: Your technology must shift to becoming air-based instead of land-based. Air-based stations can withstand the impact of your electrical currents, while your land and water suffers greatly from this assignment. Move your source of electricity to satellite components before the world goes dark with overload. You're nearing capacity right now.

"Reduce your dependency upon technology immediately, and return to more natural conditions. This is the only peaceful way out of the experiment. Modern conveniences have made many of you fat, lazy, and slothlike. Get up and realize your potential! Attain fitness, everyone! I do not mean to chastise you, but to motivate you with my deepest honor, love, and respect. "

Call upon Thoth whenever you need psychic insight, or when you seek Divine magic to help resolve a situation. His name is difficult to say without feeling like you're lisping, so when you invoke Thoth, a smile may come to your face. This mirth and joy is appealing to Thoth, so don't worry about offending him. Say aloud or mentally:

"Beloved Thoth, I call your name as your student of the Divine secrets that you so lovingly teach. Thank you for your guidance and instruction in resolving [name the situation you need help with]. Please help me be open to the power so that it may run through me as a Divine channel. Thank you, teacher. Thank you, Thoth"