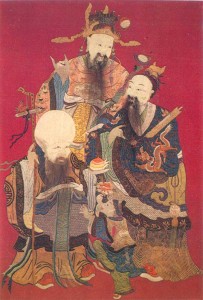 Click on the image to see another pictures of Lu-Hsing


Lu-Hsing was a mortal man named Shih Fen who was a high-ranking royal court official in the 2nd-century B.C. He was deified following his death. Lu-Hsing takes note of, and rewards, those who are committed and dedicated to their careers. He warns against engaging in corrupt behavior to get ahead. Lu-Hsing suggests healing unpleasant or dishonest situations through prayer, and by seeking Divine guidance first, before taking more drastic action such as calling the corruption to the attention of others.

Invoke Lu-Hsing before a job search so that doors will open to you easily, leading to the high road of your chosen profession. But be aware that Lu-Hsing's signs telling you which doors to walk through can be quite subtle. It takes an agile mind and much alertness to properly heed his guidance. Those who receive his counseling will appreciate the dry wit that he exhibits and the twists and turns he orchestrates, which seem to be part of his modus operandi. Always invoke Lu-Hsing before asking your boss for a raise or promotion.

"Do not rest on your laurels," he cautions. If you want to enjoy your current success instead of worrying about how to climb the next mountain, you'll need to tell Lu-Hsing that you want to pause for a regrouping.

I invoked Lu-Hsing during a visit to China, and I asked him to address the topic of attaining financial security and success. He said, "The secret of financial success is the willingness to adopt a warrior spirit in attitude, grace, and presence. This does not mean adopting an air of aggressiveness, but rather, a spirit of making treaties and pacts with oneself and others.

"Warriors have an outlook of expecting a positive outcome, and a willingness to do whatever is needed to incur that outcome. It means not giving up, but allowing for flexibility, and to flow with the energy or chi as it moves along. Be strong be vigilant for success, and be sensitive to the energy undercurrents, and you shan't go wrong"

Call upon Lu-Hsing before any major event involving employment. Imagine that you're having a mental meeting with him and that Lu-Hsing is the ultimate executive who will clear the way for whatever you request. Visualize him taking notes during your discussion, and know that he'll take care of everything. Ask him to give you very clear guidance that you'll easily understand. Then, write, "Thank you, Lu-Hsing" on a piece of paper, fold it, and hold it in your palm during the applicable situation—whether it's asking your boss for a raise, getting through a job interview, or taking part in an important meeting.